Hot air balloon in flight.  Two men are fighting on the top of the hot air balloon.  One overpowers the other and with a punch causes him to lose his footing.  The man plummets through the sky to his imminent death. The man left standing, against all odds, climbs down the balloon where he begins to fight with the pilot….

The truth is… the man really didn’t plummet to his death  In actuality he was a stuntman and hot air balloon pilot by the name of Kenny Gibson, who would activate a hidden parachute with enough time to land safely amongst the production team on the ground below.  Jeff Habberstad, the other man climbing down the balloon had harnesses in place during the entire sequence that kept him safe at all times

The value of an excellent stuntman and a properly coordinated aerial fight scene should never be underestimated, and perception truly became reality for one man!

It would be the opening sequence of an episode of the 80’s tv show, The Fall Guy, depicted above, that would set the career of then accomplished skydiver, hot air balloon pilot, and stuntman, Jeff Habberstad, in motion.  It would pluck him from relative obscurity and thrust him into the thick of the stunt and film world. He would win the award for “Best Aerial Stunt” in one of the first ever Stunt Awards, and the rest, as they say, is history. While he welcomed his sudden loss of anonymity, it was his strong work ethic, tenacity, relationship building, and desire to learn and grow, that would set him apart from his contemporaries…and now, he really is in a league all his own.  Currently, with over 100 films to his credit, he hasn’t looked back, and is the most sought after First Unit Director in Hollywood, in addition to Marvel’s go to guy!

Filmmaker Terence Gordon would visit longtime friend, Jeff Habberstad in London recently on the set of the Netflix Movie, The Old Guard, starring Charlize Theron.  These two filmmakers would meet over 15 years ago during a time in which Terence was actually interested in doing Jeff’s documentary, as he was fascinated by the second unit director space.  On this particular day, Terence was more interested in what had transpired in the many years since they met and during his podcast he would ask Jeff about what his process looked like, as all filmmakers have one.  They would talk about Marvel and what it’s like to work with them. Jeff would open up about his family, and the indescribable loss of their eldest son.

At the height of his career, and having worked in film for over 30 years, today Jeff gets multiple movie offers per year, and is very happy to pick one….but as he puts it, “I’m going to make sure it’s the coolest one!”  And based on his incredible list of films/projects to his credit that include “Spider-man”, “The Sixth Sense”, “There Will Be Blood”, the “X-Men” series and multiple Marvel films, including “Doctor Strange,” for which he directed nearly the entire 3rd act, he’s not kidding.  He’s not only picking the coolest one’s, but he has happily settled into mainly doing 2nd unit directing for Marvel.  When Terence asked Jeff about the process and what it was like to work with a powerhouse such as Marvel, Jeff went on to explain, “The Marvel movies are super fun to make. They let me do my thing.  They let me try and figure stuff out. We go get our stunt stage and we start rigging stuff up and start figuring these things out and do these proof of concepts and prove that we actually can do it.”

Jeff is married to his wife, Debbie, and they have 3 kids. The oldest, Trevor, an established stuntman and Stunt Coordinator, passed away at 27 from a rare form of cancer.  His death would deliver the worst blow to their family. Shane is a USC grad and is quickly advancing and making a name for himself in the film industry. The youngest is their daughter Allie, a USC grad, and the first of their children to get married.

In many ways, the stunt business became a family affair early on.  Jeff speaks of how all three of his children did some version of stunts their whole life, even as young children.  At the age of 5, his daughter Allie would play a young Ally McBeal, his son Shane played little Billy in the first Spider-Man movie and  Trevor would perform in the intro of  the film Face Off.  He would always make sure school came first, but would take advantage of little snippets of time and opportunities that would present themselves.

Jeff spoke of a very dark time in the life of his family.  Jeff’s son Trevor would be diagnosed in June of 2016 with a very rare form of cancer and underwent a radical form of chemo.  While he seemed to be improving to the point he was strong enough to resume normal activity, which for Trevor included skydiving, they would soon find out that the cancer had spread way beyond the point of no return. He would pass away in February of 2017.

Jeff remembers fondly how he found out  how generous his son was, as he was quite private about it.  It would be Trevor’s high school coach that would inform him that his son had been the single biggest contributor to the school’s track program over the years.  Clearly a proud moment for Jeff.  He also remembered Trevor telling him about a stunt woman from Australia that lost her arm during a stunt, and would sadly never work again.  Thanks to Trevor, he and his dad ended up being the biggest contributors to her.  Jeff would receive a beautiful letter from the woman after Travis’ death.  It’s evident during the podcast that Trevor’s generous spirit touched him greatly, and in many ways The Trevor Habberstad Foundation is and extension of Trevor and his generous heart.

To learn more about The Trevor Habberstad Foundation that among other things, provides scholarships to a number of track athletes per year at his high school visit:

To see a 5 minute Youtube video on set with Jeff click here Jeff describes some of the technical workings of a special rig used in the film.

To hear Terence Gordon’s full interview with Jeff Habberstad please listen to the podcast below.

Photos of Shepperton Studios in London, England (above & below) 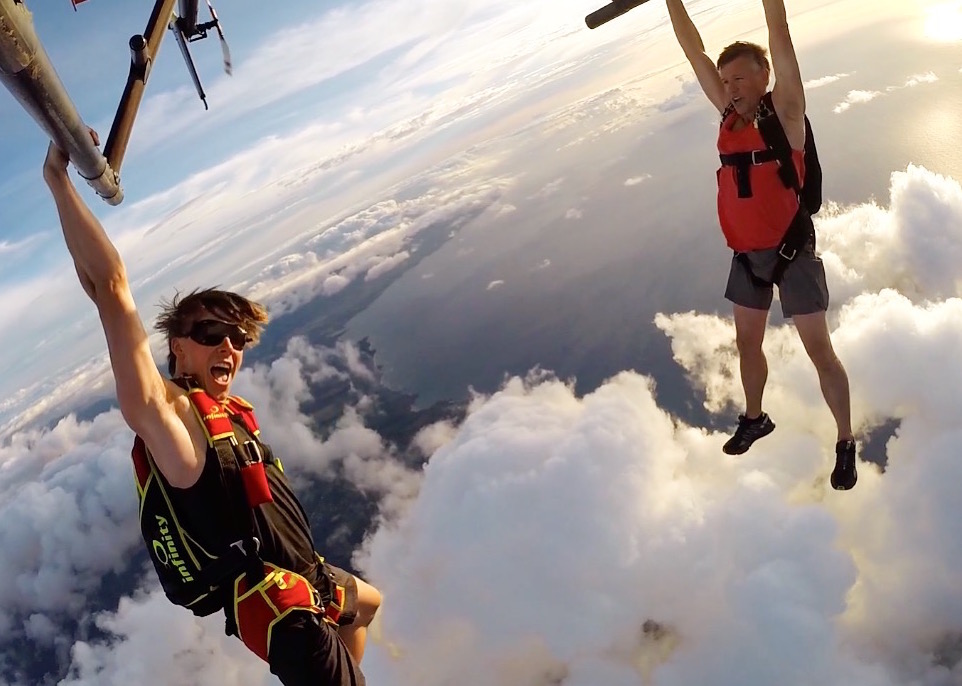 Jeff with his late son, Trevor (27th birthday over the North Shore) photo above.