When Brett Cornell (played by Matthew Martini) had a one night encounter with Megan Chandler (played by Taylor Centers) a southern girl visiting NY, little did he know that he would be a father. When he learns of this 5 years later, after the accidental death of Megan. Brett heads south to the Carolinas to claim his daughter Michelle  (Penny Munroe) who he has never met. But Brett’s checkered past mistakes also come along for the ride putting his life in danger. And when he meets his caseworker Sara (played by Casey Gogolin) their indiscretion further jeopardizing his chances of getting custody, makes for an interesting dilemma.

The film was written and directed by Terence Gordon.

This film was done as an experimental approach. I did not create a full script ahead of time. In fact, all I created was a beat outline of where I think the story would go. I then cast the parts, discussed the story and wrote the scene just prior to shooting. I wanted to create a format that would be quick to execute and let the story build on its own.

Matt Martini in #ForMichelleTheMovie. This was the first day of shooting. Not in the most ideal of conditions. We had a great location but there were many spectators roaming around the grounds making it very difficult for our actor to concentrate. We were also fighting against time for the sun was going down very quickly. This scene is just moments before our main character was about to break into a home of a very wealthy man who he feels owes him 30K.

Matt Martini in this scene we shot in the rain on a day that it was actually cold in Fort Mill. I have always enjoyed the aesthetic of a rainy scene, it adds an element of character to the atmosphere that will be difficult to create otherwise.

Matt Martini in For Michelle. This is one of my favorite images in the film. The lighting was done by Devon Smith and Brian Michael, both who were working as DP on the set that day. I operate my own camera on 90% of my film and videos as I did that day. We use the f2.8 Canon 70-200mm IS-II lens on my RED Dragon camera. This is the image I chose to place on the poster. Not just for the aesthetics, but also for the moment in the film that the character realizes just how much trouble he is in.

Matt Martini right and Alex Earnst left. Alex and Matt play in this scene with bringing a little bit of levity to an otherwise dark toned film. The two converse as they look on at a backyard brawl that Alex’s character has a vested interest in his fighter making a big win,  Matt Martini’s character Brett, is hoping to sell some of the stolen merchandise to Alex’s character. But in the end, things go completely wrong for Brett.

A newcomer to the scene is Chantell Pfitzer, who plays the sister to Casey Gogolin’s character.  Her character confronts Brett about his reckless decisions of becoming involved with her sister at the risk of her sister losing her job. Another one of my favorite scenes in this film. 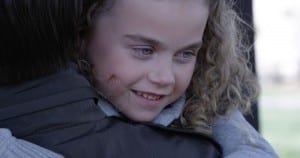 Penny Munroe a young and talented actress, who we had for only a part of one day on this scene and another half day on another scene, did an amazing job on a very touching scene in the film. After traveling from Asheville with her mother who is also an actress on series like the Walking Dead, was very patient as we did take after take on getting into her final performance for that character. Working with child actors typically has its challenges,  acting is a grueling profession and can be difficult for the concentration factor.  But nevertheless we all had fun and I enjoyed working with Penny. 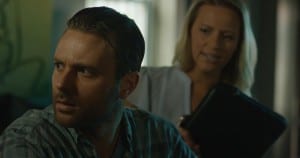 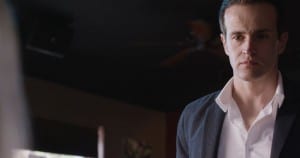 This scene was shot at the Crown Station Pub in Charlotte NC (Location no longer exist). A great location for the atmosphere in this scene. We shot from 9:30AM-2: 30 PM that day. Lost a couple lights on that day with folks tripping over them. However, we got through about 8 pages in 5 hours on that day. Typically a feature film will shoot 5 page in 10-12 hours, but we did not have the luxury of time since the location needed to be open for business. Above left is  Casey Gogolin and Matt Martini. On the right is Kelly Melerine, who only appears in this scene as Sarah’s boyfriend. In this scene, Kelly’s character enters the bar to see Sarah’s hand and on Brett’s, this takes him over the edge.
Lovemaking scenes can be challenging at times, with beat by beat of the unnatural approach. Well, certainly you can just let the actors have at it, and then direct them back as needed. I had a very specific direction of what I wanted to accomplish in this scene. But had to move to plan B. Sex on the countertop, instead of the entire busted pipe in the kitchen scenario.  Needless to say, there were many opinions coming in some helpful some not so much from the crew, but we got through it and had a fun time in the process, even if it was at 2 am and we were all ready to call it a day. 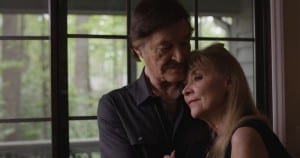 George Peanut Neely. I cast him because of his authentic look and close resemblance to Charles Bronson, who I remember of being a real tough guy character. George plays Abel in the film. He is hired by Chase a rich diamond dealer to go after Brett Cornell after discovering that he was the one who broke into this home. On the right is George and Linda Justice, who plays a past love interest to George’s character. 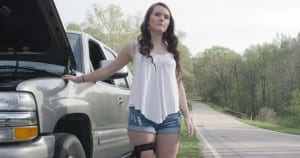 Left is Courtney McLaren, she plays Anna who has broken down on the side of the road after having a fight with her boyfriend. Brett comes along and tries to help her. He discovers that she has a very estranged relationship with her father much as he does. He tries to give her the advice that he should have followed himself. I cast Courtney who was acting for the very first time and did a great job for a first-time actress. She had an injured herself prior to her coming on board the project, so we worked her injury into the scene setting.

My fight choreographer Brandon K Webb on the left orchestrated the fight scene. We shot this in Fort Mill in the woods. We moved quickly on that day not spending a lot of time for we needed to get to another location set up. And some of the actors in the scene had last-minute scheduling conflicts. Nevertheless, we got what we needed. The makeup was done by Dani Gulledge, who has done 90% of the makeup for the film. She sometimes works with an assistant on other scenes such as the accident scene with CMT Artist Christina Taylor, who plays the young mother.